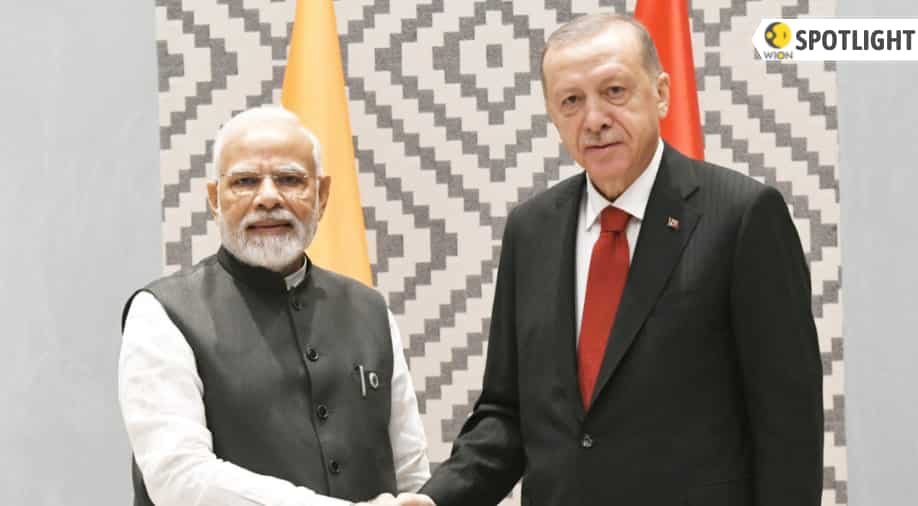 The relationship between India and Turkiye, marked by irritants such as Ankara’s position on the Kashmir issue, is getting friendlier after the meeting between Prime Minister Narendra Modi and Turkiye’s President Recep Tayyip Erdogan in Samarkand during the recent SCO summit.

Although External Affairs Minister S Jaishankar had taken a hard line against Turkiye, the Modi-Erdogan meeting, notable for its “very constructive discussions” set the tone for a significant shift. Interestingly, Union Commerce and Industry Minister Piyush Goyal is perceived to have been instrumental in bringing about the shift that Modi wanted in India’s ties with Turkey.

Knowledgeable sources say that Goyal worked overtime and apprised the prime minister of the dangers of isolating Turkiye, especially the adverse impact of this on Indian industry. He drew attention to the fact that Turkiye is a global logistic power, from which India cannot remain distanced for too long.

There are some 150 Indian companies that have a presence in Istanbul. The bulk of them also conduct their business in Europe from Istanbul as it is more economical to operate out of Turkiye than Germany or elsewhere in Europe. Many of these companies are in the business of getting iron ore, coal and such raw materials into Turkiye, from where they then supply these to Europe as and when the need arises.

These business groups are said to have pushed their case with Goyal, who saw merit in their viewpoints and conveyed it to the prime minister. Thereafter, according to sources, instructions went from the prime minister for improving relations.

However, the process to reset relations with Turkiye had begun in early 2022, with a view to create the conditions that would be conducive for Modi and Erdogan to meet in Samarkand and show some result. As part of this process, MEA’s Secretary (West) Sanjay Verma had visited Ankara to clear the decks for reviving foreign office consultations, which were indeed held on June 10.

By then India had also appointed an ambassador to Turkiye. This was a reversal of the hard line that an envoy need not be sent until Ankara changed its stand on Kashmir and stopped backing Pakistan.

During the period of this hard line, Jaishankar was opposed to having any truck with Turkiye. He was angry that Turkiye helped Pakistan to dodge blacklisting by the FATF. In October 2021, there was a plan to have a statue of Mahatma Gandhi at a park in Ankara, which was cancelled at the eleventh hour. The bust had arrived in Ankara from New Delhi, only to be followed by a message from Jaishankar to cancel the event and keep relations cold to ‘punish’ Turkiye for Erdogan raking up the Kashmir issue again at the UN in September 2021. As a result, there was a palpable coolness when the new Turkish ambassador arrived in New Delhi.

Both India and Turkiye seem to have put that phase behind and moved on to engage productively. This is reflected in Erdogan’s address to the UN General Assembly on September 21, where he said it is “unfortunate” that India and Pakistan have not been able to establish peace 75 years after independence and hoped for “fair and permanent peace” in Kashmir.

Such a statement, to which Jaishankar responded with a reference to Turkey’s Cyprus problem, is viewed as being “neutral” and one result of the Modi-Erdogan talks in Samarkand. Neither Erdogan nor Jaishankar internationalised the issues (Kashmir and Cyprus, respectively); and, both desisted from referring to the UN Security Council resolutions on the respective issues.

The shift in relations seems to stem from the perception that it would be more productive for India, as an Asian power, to keep the focus on the big picture in its dealings with Turkey which is a Mediterranean power. Ankara’s sense of the war in Ukraine can be useful for New Delhi when Turkiye is seeking to position itself as a potential peacemaker on the world stage. And, the peacemaker’s role is something that is also being urged upon India especially after Modi’s observation to Russian President Vladimir Putin that “this is not an era of war”.

Commerce seems to have succeeded where diplomacy could not.