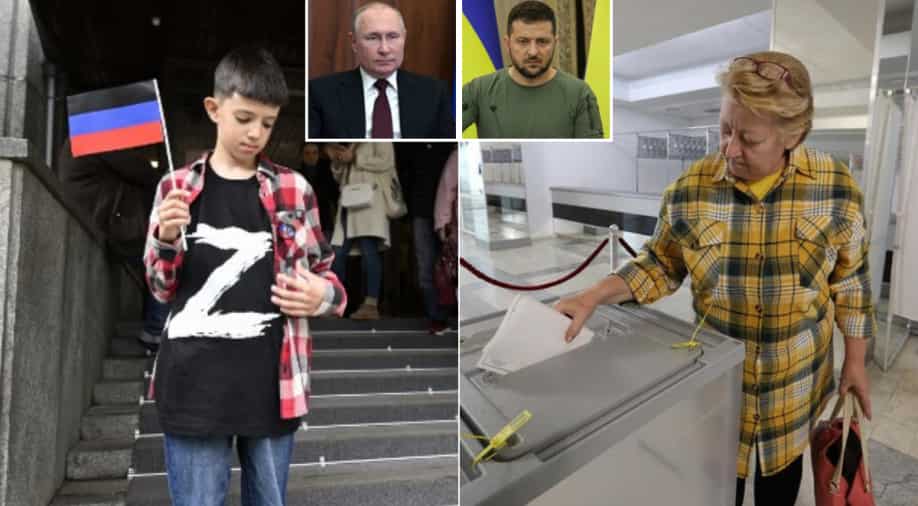 Russia is aiming to annex four occupied regions of Ukraine and hence the launched referendums on Friday (September 23). The referendums can prove to be a turning point in the seven-month-old war but Kyiv has termed them sham.

Ukraine also claimed that it saw residents threatened with punishment if they did not vote. The Ukrainian officials have claimed that people were banned from leaving some occupied areas until the four-day vote was over.

As per the officials, armed groups were going to homes to force people to cast ballots, and employees were threatened with sacking if they did not participate.

Yuriy Sobolevsky, the displaced first deputy council chairman of the Kherson region, said, “Today, the best thing for the people of Kherson would be not to open their doors.”

The results of the referendums will be extremely important for Russian President Vladimir Putin, who recently announced a military draft this week to enlist 300,000 troops to fight in Ukraine.

Voting is underway in the provinces of Luhansk, Donetsk, Kherson and Zaporizhzhia in the east and southeast. These regions represent about 15 per cent of Ukrainian territory. The voting was due to run from Friday to Tuesday.

‘We struggled for eight years for this’

The military of the self-proclaimed Luhansk People’s Republic (LPR) is voting on the referendum on joining Russia as military personnel of Luhansk cast their votes. “We’ve been waiting for it for a long time. It was a tortuous time for us. A lot of lives were lost for it,” said Sergey Moiseenko, a member of the LPR military.

As the annexation polls opened, Ukraine on the other hand claimed on Friday that its forces had recaptured a village in the eastern Donetsk region and territory around another war-scarred town there.

Oleksiy Gromov, a senior army official, told reporters: “The Ukrainian army has retaken the village of Yatskivka in Donetsk region.” He said that Kyiv’s forces had “regained control over positions to the south of Bakhmut”.

Yatskivka sits on the eastern bank of the strategic Oskil river, which Kyiv’s forces crossed after recapturing swathes of territory in the neighbouring Kharkiv region.

Meanwhile, Bakhmut is an important city located in the Donetsk region.