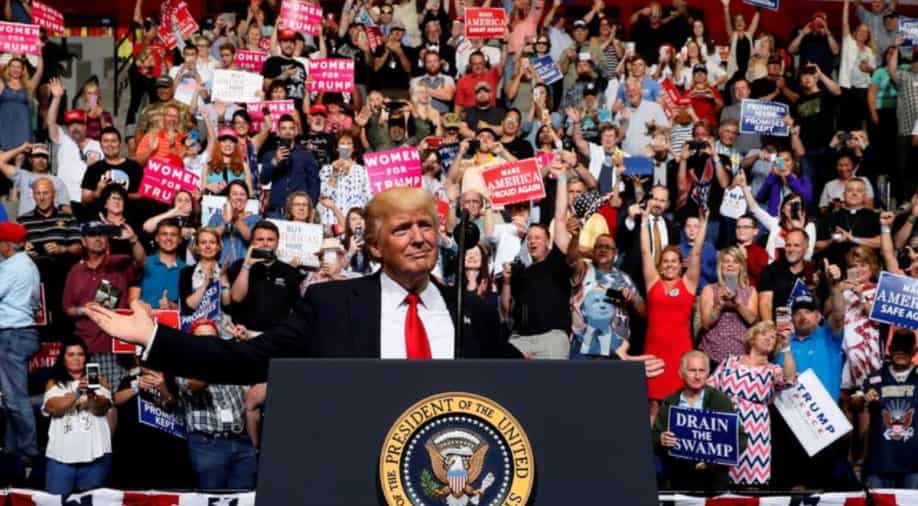 Former President Donald Trump appeared to more fully embrace QAnon on Saturday, playing a song at a political rally in Ohio that prompted attendees to respond with a salute in reference to the cultlike conspiracy theory’s theme song.

While speaking in Youngstown in support of J.D. Vance, whom he has endorsed as Ohio’s Republican nominee for the Senate, Trump delivered a dark address about the decline of the U.S. over music that was all but identical to a song called “Wwg1wga” — an abbreviation for the QAnon slogan, “Where we go one, we go all.”

As Trump spoke, scores of people in the crowd raised fingers in the air in an apparent reference to the “1” in what they thought was the song’s title. It was the first time in the memory of some Trump aides that such a display had occurred at one of his rallies.

Aides to Trump said the song played at the rally was called “Mirrors,” and it was selected for use in a video that Trump played at conservative meeting CPAC and posted on his social media site, Truth Social. But it sounds strikingly like the QAnon theme song.

Taylor Budowich, a spokesperson for Trump, said, “The fake news, in a pathetic attempt to create controversy and divide America, is brewing up another conspiracy about a royalty-free song from a popular audio library platform.”

Last week Trump posted an image of himself on Truth Social wearing a Q pin on his lapel and under a slogan reading “The Storm is Coming.” Adherents to QAnon believe that the “storm” is the moment when Trump will retake power after vanquishing his enemies, having them arrested and potentially executed on live TV.

Trump’s speech in Ohio had an apocalyptic tone and seemed intended to delegitimize officials in the FBI and Justice Department who are involved in investigations into both his handling of sensitive government documents removed from the White House and the role that he and allies played in trying to overturn the 2020 election.

Addressing the conflict in Ukraine, Trump also warned that the United States “may end up in World War III.” Assailing reporters, as he often does, he said that there was “no fair press any longer” and repeated his frequent refrain that the news media is “truly the enemy of the people.”