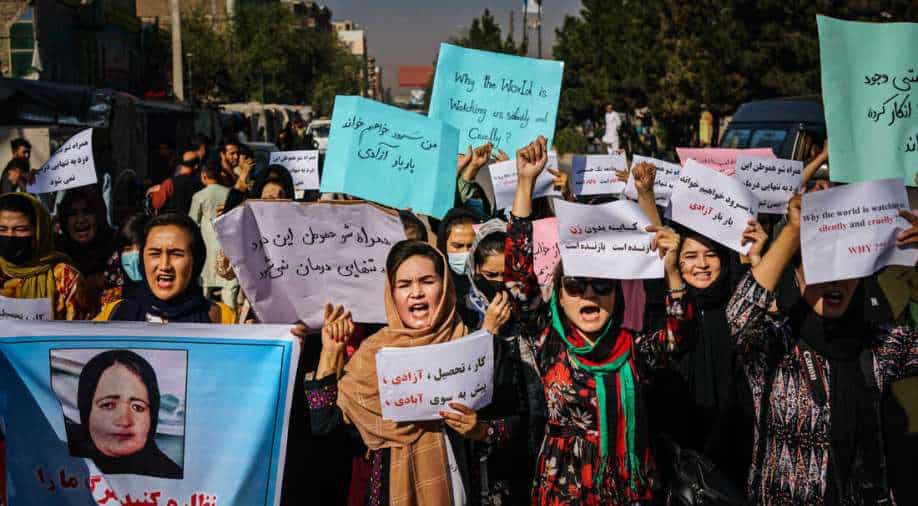 Days before the first anniversary of the hardline Islamists’ return to power, Taliban fighters forcefully dispersed a rare gathering in the Afghan capital on Saturday by beating protesting women and firing into the air.

The Taliban have reversed the slight advancements gained by women throughout the two decades of US operations in Afghanistan since taking power on August 15 of last year.

An AFP correspondent stated that some 40 women marched in front of the education ministry building in Kabul while chanting “food, work, and freedom,” but the fighters dispersed them by shooting their weapons into the air.

Taliban fighters followed and clubbed some female demonstrators with their rifle butts after they sought safety in adjacent stores.

The demonstrators carried a banner which read “August 15 is a black day” as they demanded rights to work and political participation. “Justice, justice. We’re fed up with ignorance,” they chanted, many not wearing face veils.

“Unfortunately, the Taliban from the intelligence service came and fired in the air,” said Zholia Parsi, one of the organisers of the march. “They dispersed the girls, tore our banners and confiscated the mobile phones of many girls.”

An AFP correspondent witnessed  the first women being physically assaulted by Taliban fighters.

The Taliban promised a gentler version of the strict Islamist rule that characterised their first term in power from 1996 to 2001 after taking control last year.

But in order to conform to the movement’s severe interpretation of Islam, numerous limitations have already been put in place, particularly for women.

Many government occupations are no longer open to women, and tens of thousands of girls have been excluded from secondary education. Additionally, women are now only permitted to visit the public gardens and parks in the capital on days when men are not present. Long distance solo travel is also no longer permitted.

Hibatullah Akhundzada, the head of the Taliban and the country’s ultimate authority, commanded women to completely cover themselves in public, including their faces, preferably with an all-encompassing burqa.

The Taliban regime has received harsh criticism from the UN and human rights organisations for its treatment of women.

Richard Bennett, the UN’s special rapporteur on human rights in Afghanistan, told reporters in Kabul during a visit in May that these measures display a “pattern of absolute gender segregation and are intended to make women invisible in the community.”

At first, a few Afghan ladies protested modestly by pushing back against the limits. However, the Taliban quickly apprehended the ringleaders and imprisoned them without charge while maintaining their innocence.