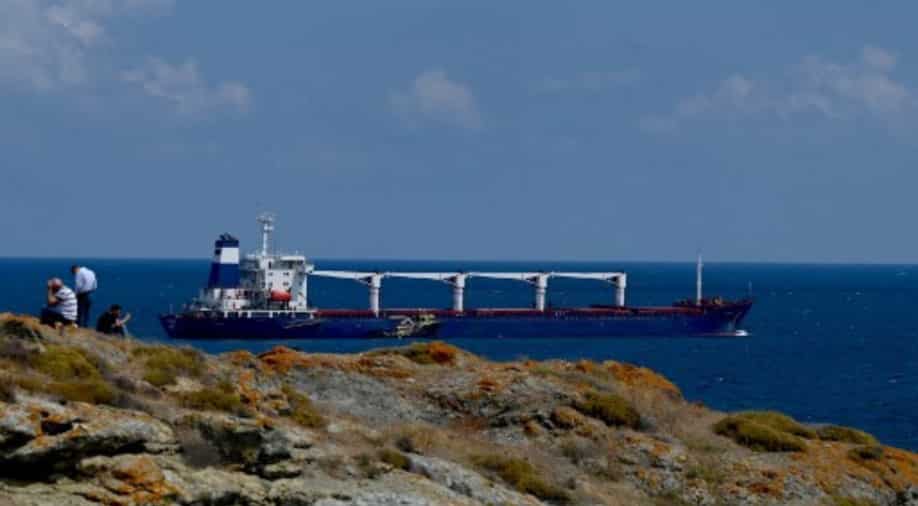 A Russian and Ukrainian team on Wednesday completed a high-stakes inspection of the first shipment of grain from Ukraine since the Kremlin’s invasion five months ago helped spark a global food crisis.

The checks aboard the Sierra Leone-flagged Razoni in Istanbul were being watched closely for signs of how well the first agreement signed by Moscow and Kyiv since Russia invaded its pro-Western neighbour can hold.

A deal brokered by Turkey and the United Nations last month lifted a Russian naval blockade of Ukraine’s Black Sea cities and set terms for millions of tonnes of wheat and other grain to start flowing from Ukraine’s filled silos and ports.

Ukraine exports roughly half of the sunflower oil used on the world market and is one of the world’s main supplies of grain.

An almost complete halt to its exports helped push up global food prices and make imports prohibitively expensive in some of the poorest countries in the world.

The Razoni is due to deliver more than 26,000 tonnes of maize to Lebanon — a crisis-wracked country that imports more than 80 percent of its wheat from Ukraine and Russia.

The ship sailed through a specially designated corridor in the mine-infested waters of the Black Sea before reaching the northern edge of the Bosphorus Strait on Tuesday.

A team of 20 inspectors from the two warring parties and the UN and Turkey strapped on orange helmets and boarded the ship early Wednesday for a check that officials said lasted less than 90 minutes.

The 186-metre (610-foot) long vessel is now due to sail down the Bosphorus Strait in the heart of Istanbul before moving on to the Marmara and Aegean seas.

But it also accuses Russia of stealing Ukrainian grain in territories seized by Kremlin forces and then shipping it to allied countries such as Syria.

But Turkish hopes that the grain deal could help build trust and lead to ceasefire talks have so far proved futile.

Russia has continued to pound southern Ukrainian cities near the Black Sea with missiles and pressed on with its grinding ground assault across the east.

Officials in Mykolaiv said no one was killed Wednesday in shelling on one of the southern city’s supermarkets that came just days after the region’s grain mogul and his wife died in a targeted strike on their house.

Moscow said on Wednesday that it had destroyed another foreign arms deport in western Ukraine — a region the furthest removed from the fighting.

Kyiv has launched mandatory evacuations from the eastern Donetsk region — now bearing the brunt of Russia’s offensive — because the government does not expect to be able to provide it with heat in the cold winter months.

Ukrainian President Volodymyr Zelensky has urged the estimated 200,000 remaining residents of the Donetsk region to leave.

Kyiv’s forces have been pressing a counter-offensive to drive out the Russians from the southern Kherson region near the Kremlin-annexed Crimea peninsula.

The Ukrainian presidency said it had “liberated” seven more villages in the region while 53 remained under Russian control.

Ukraine has been bolstered by more supplies of Western weapons — particularly long-range rockets — ahead of the planned push to retake Kherson city.

The United States announced a new tranche of weapons worth $550 million for Ukraine’s forces.

These include longer-range ammunition for increasingly important HIMARS rocket launchers and artillery pieces.

Ukraine is using the HIMARS and similar Western weapons to smash Russian arms depots and break down its lines of ground communication across the east.

The Russians have been unable to seize any major village or city since gaining full control of the Donbas war zone’s smaller Lugansk region in early July.

Zelensky told US President Joe Biden in a message that “the word ‘HIMARS’ has become almost synonymous with the word ‘justice’ for our country”.

Russia has responded by stepping up its propaganda battle against the West and Kyiv.

Its supreme court this week labelled Ukraine’s Azov regiment a “terrorist” organisation — a decision that could pave the way for captured fighters to face lengthy jail terms.

Azov fighters were among 2,500 Ukrainian soldiers who surrendered in May after weeks of fierce resistance at the Azovstal steel plant in devastated Mariupol.

The regiment — which was incorporated into Ukraine’s national guard in 2014 — is demonised by Moscow for alleged far-right links.

Its members were among 50 Ukrainian servicemen killed last week in an attack on a jail holding prisoners of war in Russian-occupied territory.