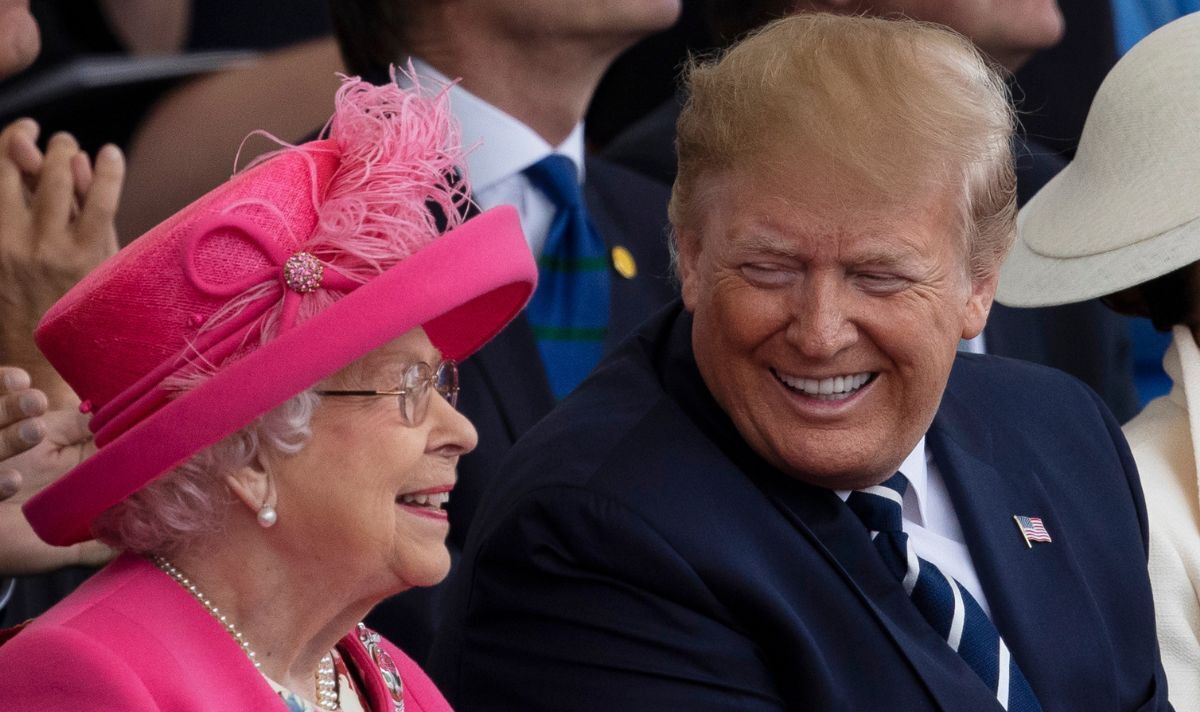 Biographer Gyles Brandreth is a former Conservative MP who had a close relationship with certain members of the Royal Family and has now written a biography of Queen Elizabeth which gives an incredible insight into her personality. According to an exclusive extract of the new book published by MailPlus, the Queen often saw the humour in things, and certainly did when she met former US President Donald Trump in 2018.

The Queen apparently “had put up” with Donald Trump walking in front of her while they were inspecting the Guard of Honour at Windsor Castle.

The biographer wrote: “Far from being offended, she was amused.”

Later on that night, Queen Elizabeth watched her interaction with the former POTUS on television and when she saw herself “bobbing about behind him”, she laughed out loud.

During her 70-year reign on the throne, Queen Elizabeth met with 15 Britain Prime Ministers and her time as Britain’s monarch also spanned over the terms of 14 American Presidents.

However, it seemed Mr Trump was quite taken with Queen Elizabeth during his state visit, and later wrote that the pair of them had gotten “along wonderfully, talking the whole evening”.

When Queen Elizabeth died in September, the former Commander-in-Chief wrote a tribute to her in the Daily Mail and described her as “grace, charm, nobility… she was an icon to the world and her loss is felt by billions”.

He added: “She was beloved by the American People like few others – the Queen was truly special to us.”

The former POTUS also revealed that he once asked Her Majesty who her favourite Prime Minister had been, to which she replied she had liked them all.

READ MORE: Kate and William will not ‘run scared’ of Harry and Meghan in US

Rather than take any offence, that evening Queen Elizabeth opened her toast to George Bush by saying: “I wondered whether I should start this toast by saying, ‘When I was here in 1776…'”

All the guests at the White House laughed, and Mr Bush later responded: “Your Majesty, I can’t top that one.”

A similar incident also happened with Canadian Prime Minister Justin Trudeau in 2015, when he mentioned that Queen Elizabeth had met his father Pierre Trudeau who served as prime minister from 1968 to 1979.

When the Queen went to make her speech, she began by saying “Thank you, Mr Prime Minister, of Canada, for making me feel so old”, which caused everyone in the room the laugh.

After Queen Elizabeth died, Mr Trudeau remarked that he had benefited from her counsel as well as “her thoughtfulness, her curiosity, her sense of humour”.