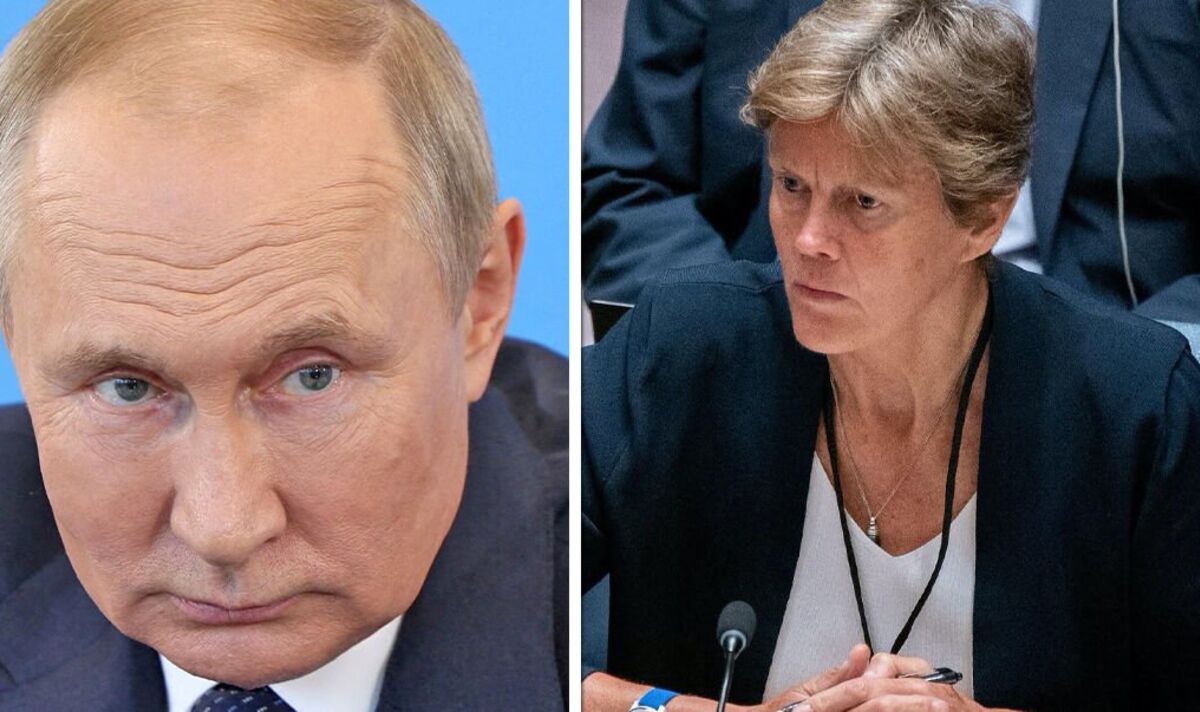 Russia is actively seeking to undermine the authority of the United Nations, and Britain is “completely right” to challenge attempts to force a secret ballot on a motion to condemn Vladimir Putin for his annexation of four regions of Ukraine, Tory MP Tobias Ellwood has said. Britain’s ambassador to the UN, Barbara Woodward, today rejected Russia‘s bid, and requested the 193-member body vote publicly.

Mr Ellwood, who is the chairman of Parliament’s Defence Committee as well as the MP for Bournemouth East, told Express.co.uk: “Britain is absolutely right to criticise Russia’s call for a secret vote at the UN.

“Russia now joins China in seeking to erode the authority of the United Nations as custodians in upholding international standards and values.

“Russia’s illegal actions in Ukraine should be publicly called out by the global community.

Moscow has moved to annex four partially occupied regions in Ukraine – Donetsk, Luhansk, Kherson and Zaporizhzhia – after staging what it described as referendums.

Ukraine and its allies have denounced the votes as illegal and coercive.

The General Assembly is set to vote on a draft resolution that would condemn Russia’s “illegal so-called referenda” and the “attempted illegal annexation”.

She wrote in a letter to the General Assembly president: “To conduct a secret ballot on a General Assembly decision would go against decades of precedent and undermine the practices of the world’s most representative deliberative body.

The General Assembly is due to vote on the draft resolution on Tuesday or Wednesday, say diplomats.

It has been trying to chip away at its international isolation after nearly three-quarters of the General Assembly reprimanded Moscow and demanded it withdraw its troops within a week of its February 24 invasion of Ukraine.

The moves at the United Nations mirror what happened in 2014 after Russia annexed Ukraine’s Crimea.

At the Security Council, Russia vetoed a draft resolution that opposed a referendum on the status of Crimea and urged countries not to recognise it.

The General Assembly then adopted a resolution declaring the referendum invalid with 100 votes in favour, 11 against and 58 formal abstentions, while two dozen countries didn’t take part.

Earlier this week, the UN blocked attempts to debate allegations of human rights violations in respect of the Uighurs in the Chinese Province in Xinjiang, prompting Mr Ellwood to take to Twitter to voice similar concerns.

He posted: “This is ruthless Chinese political power.

A UN vote to just debate human rights abuses/crimes against humanity in Xinjiang province -DEFEATED; 19 to 17 against; 11 abstain.

“Confirmation our world is witnessing an ideological power struggle and is slowly splintering into two.”