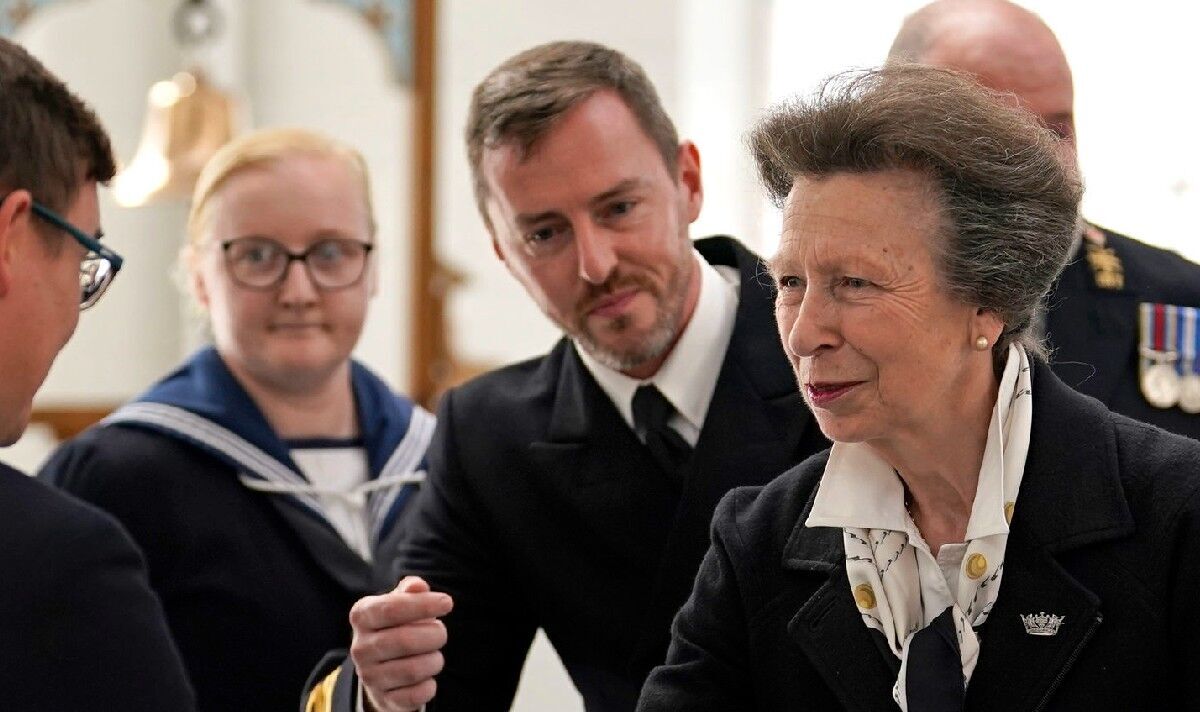 Princess Anne has been pictured on her return to royal duties as she met with Royal Navy officers in Portsmouth. The Princess Royal has headed out to thank members of the Armed Forces who took part in the Queen’s funeral. Acting in her role as Commodore-in-Chief Portsmouth, Anne shook hands and put on a brave face just days after saying her final goodbye to her mother.

Later this afternoon, the 72-year-old will travel to St Omer Barracks, Aldershot, to visit personnel who played a key role in providing logistical support for the funeral and other associated ceremonial duties. She will undertake this engagement as the Colonel-in-Chief of both the Royal Logistic Corps and Royal Corps of Signals.

The period of national mourning ended on Tuesday, but royal mourning will resume until Monday. Known as a very hard-working royal, Princess Anne had a close relationship with the Queen.

She was at her mother’s bedside during her final hours, a detail the Princess Royal revealed in a rare personal statement published five days after Her Majesty’s death.

Anne added that she was honoured to have been tasked to accompany the Queen on her last journey from Scotland to London.

She wrote: “I was fortunate to share the last 24 hours of my dearest mother’s life. It has been an honour and a privilege to accompany her on her final journeys.

“Witnessing the love and respect shown by so many on these journeys has been both humbling and uplifting.”

Anne is not alone in returning to work earlier than expected.

In an unexpected public appearance, the Prince and Princess of Wales visited Windsor’s Guildhall to meet volunteers and operational staff who were involved in facilitating the committal service for the Queen, held on Monday afternoon at St George’s Chapel.

They also worked to support the crowds who gathered in Windsor to bid the last farewell to the beloved sovereign.

The unsung heroes worked behind the scenes on the day itself and in the run-up to the service to arrange portaloos, bins, program road signs and move the flowers among other duties.

Huge crowds welcomed William and Kate outside the Guildhall.

Both royals continued to wear black outfits, with the princess donning a dress coat with prominent golden buttons.

Another royal appearing in public today to thank those who have been in the Queen’s service in Prince Edward.

The Earl of Wessex arrived in Estonia on Wednesday evening, ahead of a meeting with troops based at the Camp Tapa military base.

As the Royal Colonel of 2nd Battalion The Rifles, the Earl of Wessex will thank the military personnel today for their continued service under the Queen’s reign and their commitment to King Charles III as the new Head of the Armed Forces.

Tomorrow, he will be in Paderborn, Germany, to complete a similar task as he meets troops on deployment from the Royal Wessex Yeomanry at the Normandy Barracks.