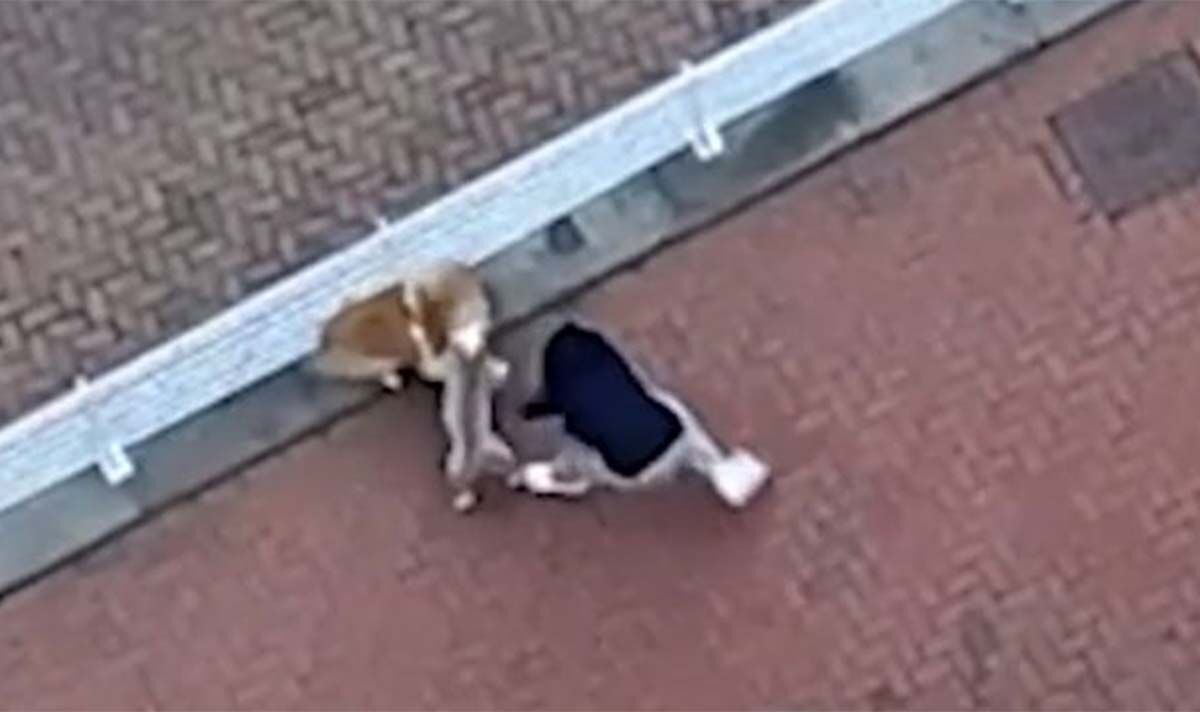 The owner claims his beloved pup was viciously mauled in an unprovoked attack last Friday (July 29). Chow Chow Nala was seen cowering against the railings in shocking footage of the attack, in which another larger dog charges at her outside the Affinity Living apartments.

Nala has now been left on numerous painkillers, reports Manchester Evening News, and saw an emergency veterinary nurse – with costs so far of over £1,600. Distraught owner Az, who lives on nearby Greengate, said Nala has become “part of the family” since he picked her as the runt of the litter in 2019 and trained her to be a specialist therapy dog.

Az Hussain, 38, who works in marketing, was on his way back from London when his 16-year-old nephew called him to say little Nala had been attacked whilst on her usual walking route. Video footage shows a passer-by make a brave attempt to pull the vicious dog off and kick it during what he said was a 10-minute ordeal.

Speaking to the Manchester Evening News, a clearly emotional Az said: “I had just got back from a trip in London and my nephew rang me screaming and crying that Nala had been attacked. He had taken her on her usual familiar route that she goes on, when this other dog just appeared from nowhere.

“You can tell by the way it was standing that it was aggressive. There was no owner around and it just charged at her and started biting and growling at her.

“As a 16-year-old boy he didn’t know what else to do. He is so comfortable around Nala, she would never bite or growl at any other living being.

“He just started screaming for help, but couldn’t get involved or he could have been injured or really badly bitten. I just rushed there as fast as I could and took her to the vet, she was bleeding and had punctures to her neck. She still has a really bad limp and bandages on.

“I am absolutely heartbroken and traumatised by what has happened. It went on for ten minutes and people tried to intervene. My little Nala is part of the family, she is the most loving animal in the world and all she does is make people smile.”

Az first noticed that Nala provided support to his youngest niece, aged five, who struggles with speech delay. He said Nala’s influence helped her deal with her anxiety and even saw her speaking improve. He then began taking the fluffy Chow Chow to training and says she regularly visits corporate and business offices to help alleviate staff stress and anxiety.

According to the RSPCA, attacks from one dog to another are not an offence. However, a court could still prosecute if a person believes they would have been injured if they tried to stop a dog attacking their animal.

Az added: “This just makes you realise how dogs can be unpredictable. This dog is still out there and this could have been so much worse. Next time it could be a young child.

“If this dog is aggressive, it could not be just a freak scenario or a one-off incident. The video is so painful to watch, you can see the size of the dog compared to Nala and how aggressive it is, even from a distance.

“It is absolutely heartbreaking. All Nala does is bring joy to others. She has no concept of aggression and is unable to even hurt a fly and it is so painful knowing she has been through this. She is so timid and loving.

“She won’t even leave the apartment without me having to pick her up because she is so scared.”

Az said he will be reporting the incident to police online.