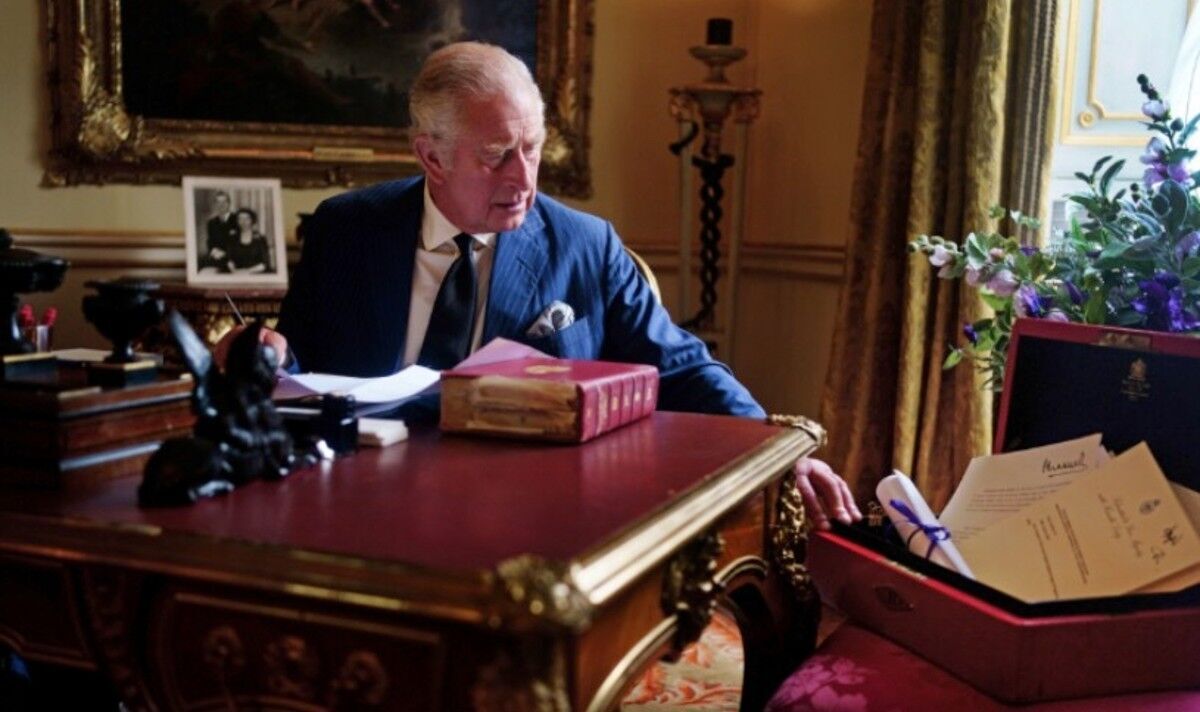 King Charles III has been pictured with his red box for the first time. In a carefully arranged photograph taken last week, the King can be seen carrying out official Government at Buckingham Palace.

Red boxes contain papers from Government ministers in the UK and the realms as well as from representatives of the Commonwealth. Documents in a locked, red despatch box are sent from the Private Secretary’s office to the King wherever he is around the world. These include papers which require a signature, briefing documents and information about forthcoming meetings.

In the picture, King Charles III sits at a desk with papers, including one tied with a ribbon, next to him. A black and white photograph of the late Queen Elizabeth II and the Duke of Edinburgh is also shown. It was given to King George VI for Christmas in 1951 by the couple.

The image recalls one of the late Queen at her despatch box while at Balmoral in 1972. The Queen’s reign spanned many British Governments under 14 Prime Ministers and dozens more in the Commonwealth. She received weekly briefings from the Prime Minister of the day and dozens of Government documents passed across her desk every week for formal approval.

Barrow Hepburn & Gale said the role of the boxes has not changed for over a century. It added: “There are two possible reasons why the despatch box became the iconic red colour.

“The widely-accepted reason relates to Prince Albert, consort to Queen Victoria, who is said to have preferred the colour as it was used prominently in the arms of his family, the Saxe-Coburg-Gotha.

“However, there is a school of thought with origins dating back to the late 16th century, when Queen Elizabeth I’s representative, Francis Throckmorton, presented the Spanish ambassador, Bernardino de Mendoza, with a specially constructed red briefcase filled with black puddings.

“It was seen as an official communication from the Queen and so the colour red became the official colour of the state.”

The photograph was released as a new poll found support for the monarchy increased after the funeral of Queen Elizabeth II, who died aged 96 at Balmoral on September 8.

Almost half of those polled by Ipsos on Tuesday and Wednesday said the UK would be worse if the monarchy was abolished. Less than a quarter said the country would be improved as a republic.

The poll of 1,000 adults found 47 percent saying the UK would be worse without a monarch, up from 42 percent who said the same shortly after the Platinum Jubilee in June.

Only 22 percent said abolishing the monarchy would make the country better, the same proportion as in February and down slightly from 23 percent in June.

Over the longer term, support for a republic has increased slightly from 15 percent in March 2018 while support for the monarchy continues to fluctuate around 45 percent, according to the polling.

Opinion on the monarchy is more divided among those aged between 18 and 34.

Despite this ambivalence, a majority of the public now believes the monarchy will last for another half century.

Some 56 percent of people now expect the monarchy to last for at least another 50 years, up from 45 percent in March 2022.

The proportion saying Charles III will make a good King has risen from 49 percent to 61 percent, closer to the levels of support for the Prince of Wales, whom 72 percent expect to do a good job as King when his time comes.