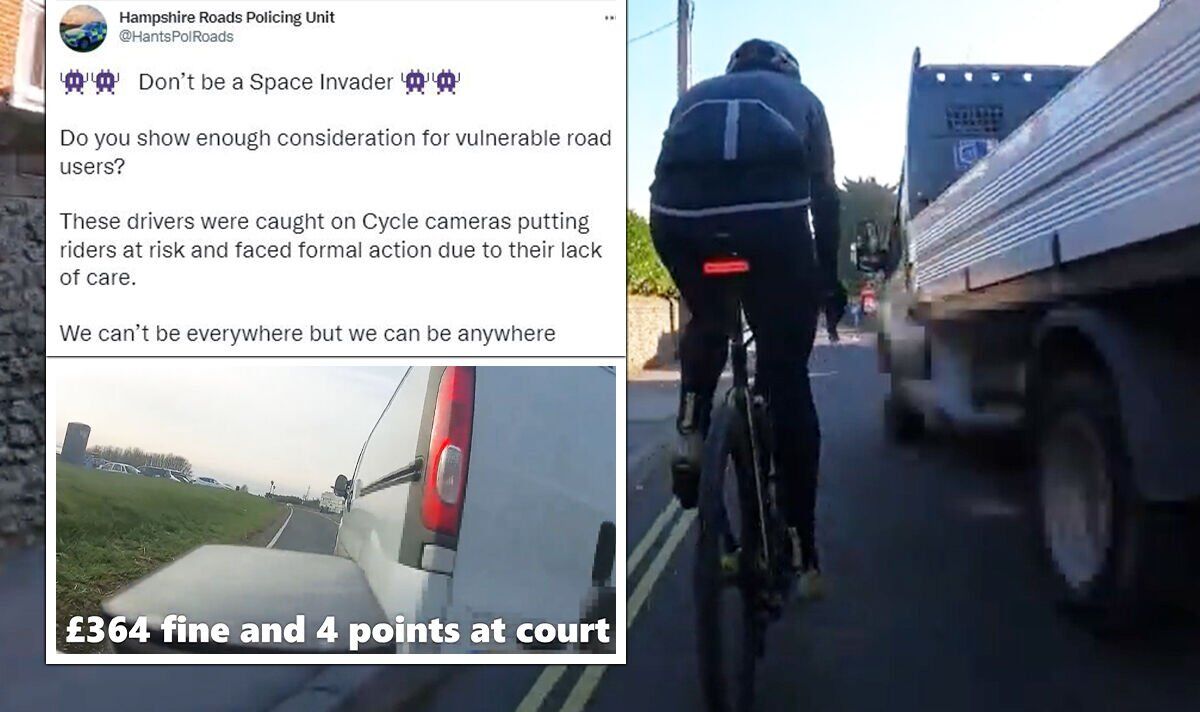 Hampshire Roads Policing Unit shared a short video showing several incidents involving motorists and cyclists.All four of the near-misses were captured on cycle cameras and reported to the police. The tweet accompanying the video, which has been viewed nearly 17,000 times reads: “Don’t be a Space Invader. Do you show enough consideration for vulnerable road users?

“These drivers were caught on Cycle cameras putting riders at risk and faced formal action due to their lack of care.

“We can’t be everywhere but we can be anywhere.”

The video shows a Volvo car driving on the wrong side of the road on a narrow country lane as a cyclist is forced to swerve out of the way to avoid a potential collision.

The offending driver received a £100 fine and three points on their licence, according to the video.

In the second incident, a van is recorded narrowly overtaking a bike before suddenly braking, with the driver punished with a £364 fine and four points on their licence.

The third near-miss shows the driver of a truck overtaking but then quickly braking to avoid an oncoming bin lorry, with a cyclist throwing their arms up in disbelief.

In the final incident, a motorist is recorded driving straight at a cyclist down a road with parked cars on either side.

But the video from Hampshire Roads Policing Unit shred on Twitter has sparked a furious backlash from motorists.

READ MORE: Boris is on holiday while the economy crashes – but RISHI is to blame

Hampshire Roads Policing Unit responded to this comment by posting a GIF of chef Gordon Ramsay rubbing his face in apparent disbelief.

They wrote alongside this: “A few things wrong with this comment that I would like to address but I think that the cycling community could say it far better than me so I will leave it to them.”

Elsewhere, Dragontao (@Arcane_Asylum) wrote: “What’s ridiculous is that waiting a few seconds to pass safely is likely to cost them no time whatsoever in the overall course of their journey, the last one being a prime example.

“Could easily have slowed and pulled into the gap.”