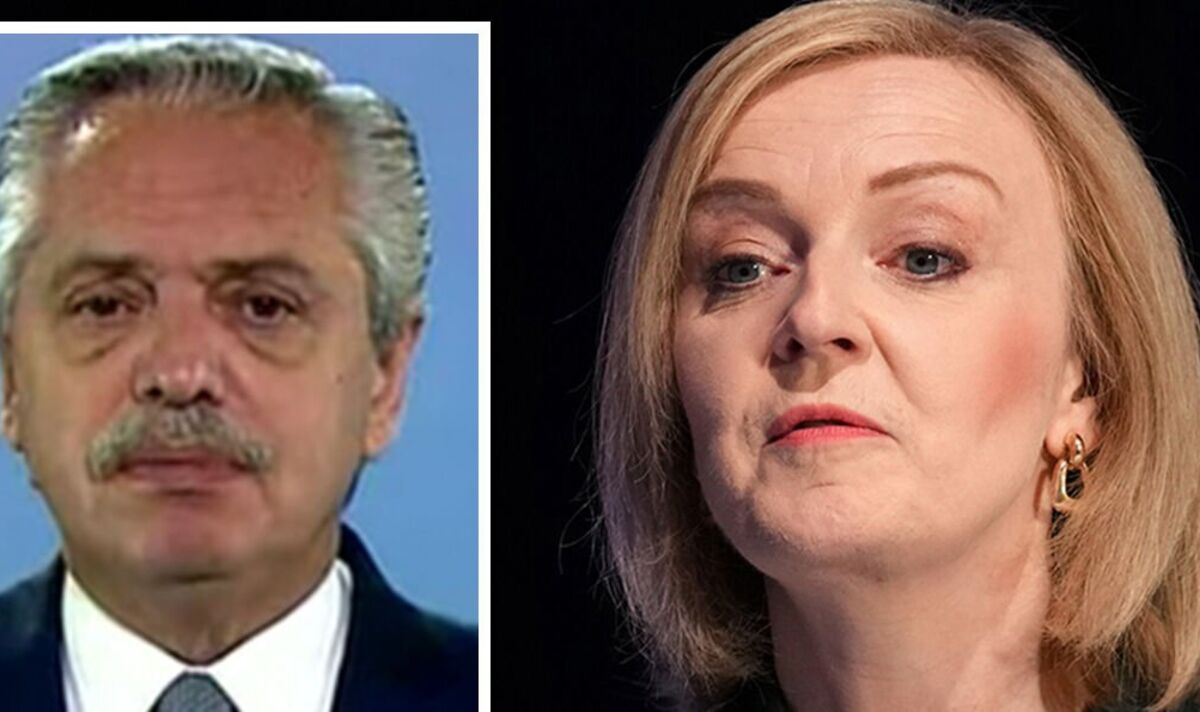 Argentina‘s President Alberto Fernandez has once again asserted his country’s sovereignty claim over the Falkland Islands. Just as previously, Mr Fernandez used his speech at the 77th United Nations General Assembly (UNGA77) to raise the issue.

Specifically, he reaffirmed what he called the “legitimate and imprescriptible sovereignty rights” over the remote archipelago Argentina calls the Malvinas, as well as South Georgia, South Sandwich Islands and the surrounding maritime areas.

He also claimed the UK had “aggravated the dispute” with an “unjustified and excessive military presence on the islands” and with “calls for the illegal exploitation of resources”.

However, he declared: “We request the Secretary General to renew his efforts to fulfil this mandate and that the United Kingdom agrees to hear the call of the international community and put an end to this anachronistic colonial situation.”

Mr Fernandez also thanked the “solidarity that Argentina has received from the whole world” after the assassination attempt against Vice President Cristina Fernández de Kirchner.

Her life was spared after the gun which the would-be assassin point at her head jammed.

JUST IN: US President Joe Biden did not hold back in his assessment

Mr Cafiero said Argentina “aspires for the South Atlantic to be a region recognised as an example of peace and dialogue between nations”.

He added: “It is unavoidable to find a solution by peaceful means to the sovereignty dispute between the Argentine Republic and the United Kingdom of Great Britain and Northern Ireland over the Malvinas, South Georgia and South Sandwich Islands and the surrounding maritime areas, which has been going on for almost 190 years.”

Calling for the region to be “preserved from extra-regional political tensions”, he added: “We highlight, in particular, resolution 41/11 of the United Nations General Assembly, which ‘solemnly’ declared the Atlantic Ocean between Africa and South America as a Zone of Peace and Cooperation.”

Mr Cafiero said: “The United Kingdom’s military presence in the South Atlantic is unjustified, disproportionate and in violation of Resolution 2065, which calls on States in all regions of the world, but especially the most militarily powerful States, to respect that declaration.

“Argentina unwaveringly reaffirms its legitimate rights over these territories.

“The United Nations, in the aforementioned resolution, defined the Question of the Malvinas Islands as a special and particular case of decolonisation, and the UN, the OAS and other international and regional forums have systematically called for the resumption of bilateral negotiations as a means to put an end to this dispute.”

Speaking on June 14, the 40th anniversary of the day the Falklands was liberated following Argentina’s 1982 invasion, then-Foreign Secretary Liz Truss, now the UK’s Prime Minister, said: “We must stay vigilant about threats to freedom, sovereignty and self determination wherever they may be.

“That is why we reject any questions over the Falklands’ right to self determination. We will stand up to all those who disrespect that right.

“The Islands could not be clearer in their right to remain a self governing British Territory with an overwhelming vote in 2013 to remain as part of the British family.”