Skip to content
HomeNewsArmenian PM Pashinyan in Iran after meeting with Putin, Aliyev 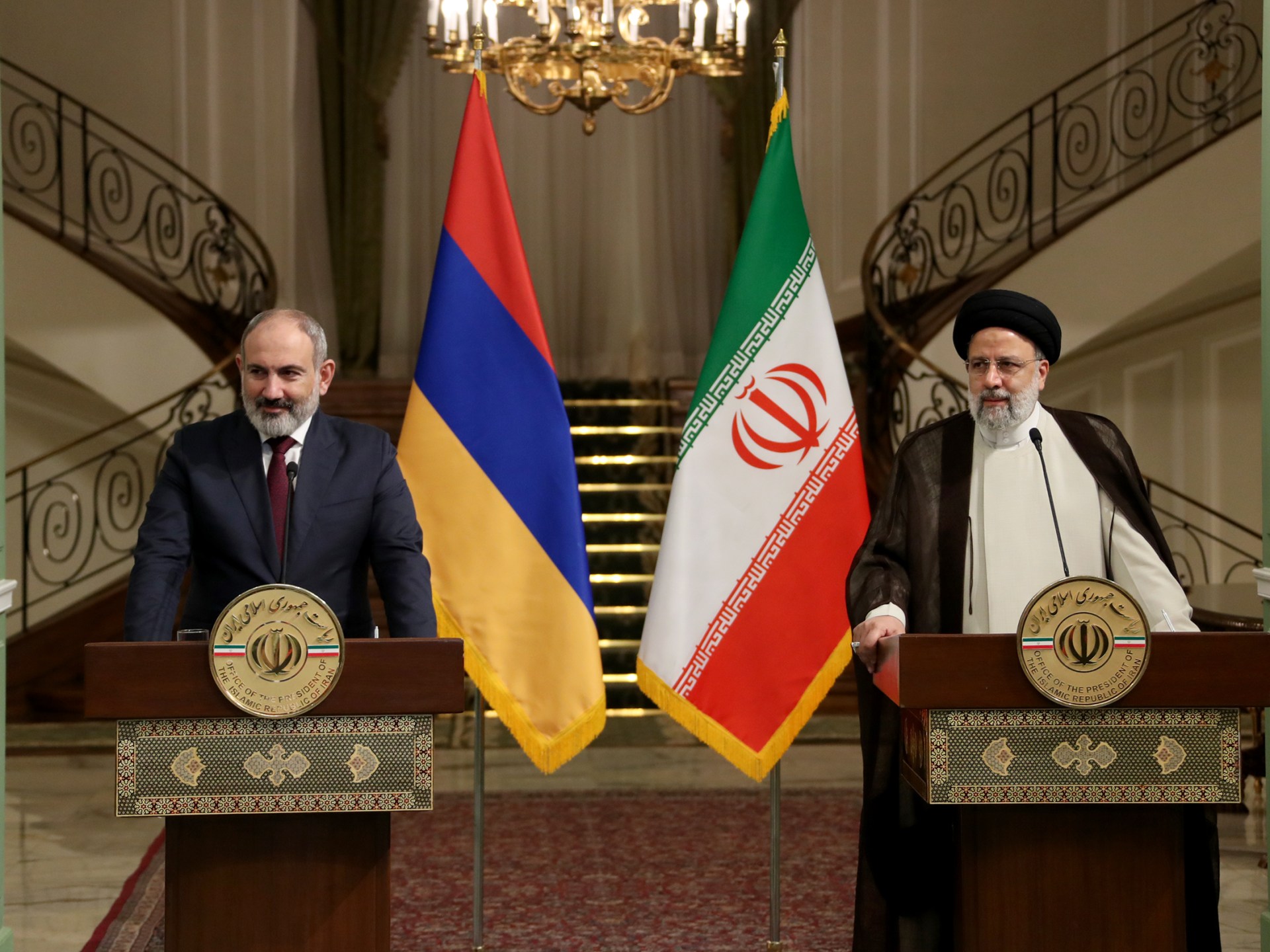 Tehran, Iran – Armenian Prime Minister Nikol Pashinyan has held high-level talks in Tehran after a trilateral meeting with Russian and Azerbaijani leaders on fighting in the Caucasus region.

Pashinyan was officially received by Iranian President Ebrahim Raisi on Tuesday morning, and the two held talks at the Saadabad Palace in the capital Tehran.

In a joint press conference following the meeting, the Iranian president said Tehran is “sensitive” about the Caucasus region because it has been part of Iranian history, civilisation and culture, and security and peace across the region are important for Iran.

“Our negotiations with Mr Pashinyan led to the conclusion that resolving the issues of the region must occur at the hands of the officials and authorities of the region, and any interference by foreigners will only create problems rather than solve them,” Raisi said.

Pashinyan said he agrees with Raisi about the region’s ability to achieve sustainable peace and security, and wishes for Iranian authorities to be fully informed about the contents of Armenia’s talks with Azerbaijan and Turkey on the contested region of Nagorno-Karabakh.

In this vein, he said, he discussed with the Iranian president what transpired a day earlier in the Black Sea Russian city of Sochi, where he sat down with Russian President Vladimir Putin and Azerbaijani President Ilham Aliyev.

Following the meeting on Monday, Putin had said the talks were “very useful” but the other two leaders would still need to resolve lingering points of disagreement that he did not divulge.

Baku and Yerevan “agreed not to use force” and to “settle all disputes solely on the basis of recognition of mutual sovereignty and territorial integrity” in a joint statement released following the Sochi meeting.

The two have been at odds for decades over the enclave of Nagorno-Karabakh, which is internationally recognised as part of Azerbaijan but is populated by ethnic Armenians.

Azerbaijan regained control over much of the region after a bloody six-week war in 2020 that ended with a Russian-brokered peace agreement.

But fighting again broke out between the two ex-Soviet countries’ forces last month, with more than 200 soldiers killed in several days.

Iran, which has borders with both countries, has been calling for an end to the fighting.

Iranian Foreign Minister Hossein Amirabdollahian had a phone call with his counterpart from Azerbaijan ally Turkey late on Monday, during which they discussed tensions in the Caucasus.

But Tehran has firmly rejected moves by Baku and Ankara aimed at creating a new transport link connecting Azerbaijan’s exclave of Nakhchivan with the Azerbaijani mainland, a route the two have branded the “Zanzegur corridor”.

Top Iranian authorities have repeatedly said any efforts to change Iran’s borders or transit links with Armenia would constitute crossing a “red line” that Tehran would not tolerate.

In a move in support of this assertion, Iran in late October became the first country to establish a diplomatic mission in the southernmost Armenian province of Syunik, opening a consulate general in Kapan, which is sought after by Baku and Ankara for their corridor.

The Islamic Revolutionary Guard Corps (IRGC) showed footage of building a pontoon bridge over a part of the Aras River for the first time to transport its forces and arms over to a northern part – which was still on Iranian soil despite the river marking parts of the border between the two countries.

Tehran has also been increasingly vocal about its interest in bolstering bilateral ties with Armenia.

Pashinyan’s visit to Tehran on Tuesday was also partly aimed at advancing this goal, with the Armenian leader saying much of the talks with Raisi dealt with improving economic and trade relations.

“We had talks about energy, agriculture, infrastructures and managing water resources, and we need to conclude the negotiations and seriously follow up on them,” he said.

Raisi, for his part, said Iran wants to increase the level of annual bilateral trade with Armenia to $3bn.

The volume of trade between the two stood at about $500m last year, according to a local media interview earlier this year with Hervik Yarijanian, the head of the Iran-Armenia Joint Chamber of Commerce.