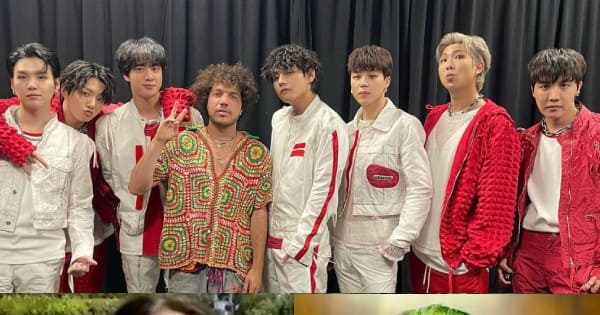 We are back with your daily dose of Hollywood News. Many top Hollywood stars turned out to be the newsmakers of the day. Korean boy band BTS hit headlines as their fans known as ARMY reacted to the music video of Bad Decisions. The video features Benny Blanco ft Snoop Dogg and ARMY is upset. The next big update from Hollywood is that Lady Gaga has confirmed her presence in Joaquin Phoenix’s Joker 2. Kylie Jenner reacted to a post that slammed her for not following sanitary protocols over her latest pictures from the cosmetics lab. Also Read – BTS x Bad Decisions: Did Jimin just react to Benny Blanco recreating his purple Dynamite look? Check Tweet

Benny Blanco ft Snoop Dogg’s Bad Decisions in collaboration with K-pop boy band BTS is out now. The music video showcases Benny Blanco as a BTS fan. Though fans loved the peppy beats, BTS fans are upset as they did not get to see much of the band members in the video. BTS makes appearances only in the form of pillow covers, posters and more. ARMY also belives that they were made fun of in the music video. Also Read – BTS: TXT’s Soobin awestruck by J-Hope aka Jung Hoseok’s Lollapalooza performance; check out cute fanboying video

We were clowned all throughout the mv ??? we were right all along, he’s so unserious. The lyrics & the mv is sending two different message though? I love it nonetheless!!! ?https://t.co/l5Ph3LYWpu

Lady Gaga confirmed to be in Joaquin Phoenix’ Joker 2

Taking to her Instagram account, Lady Gaga confirmed that she is a part of Joaquin Phoenix’s Joker 2 by sharing a teaser video. She also revealed the release date. Joker: Folie à Deux releases in 2024.

The cosmetic mogul shared some pictures on Instagram from the cosmetics lab. She was slammed by a cosmetic developer named Kevin James Bennett for not following santitory protocals as her hair could be seen open while in the lab. Kyle Jenner responded to him saying that she was she was in her personal space and will not put her customers at risk. She wrote, “I would never bypass sanitary protocols and neither would any other celeb or beauty brand owner. that’s completely unacceptable i agree. this is a small personal space creating my own fun samples and taking pictures for content nowhere near the mass manufacturing. no one is putting customers at risk ! shame on you kevin for spreading false information.”

John Legend talks about his broken friendship with Kanye West

In an interview with CNN’s David Axelrod, the All of Me singer John Legend spoke about his broken friendship with rapper Kanye West. He said that as he opposed Kanye’s support to Donald Trump, their friendship suffered. He was quoted saying, “I honestly think because we publicly disagreed on his running for office, his supporting Trump. I think it became too much for us to sustain our friendship.”

In an interview withLight the Fuse podcast, Mission: Impossible director Christopher McQuarrie broke his silence on reports suggesting that Tom Cruise is planning to exit Mission Imporsible franchise. He did not confirm the news but he did not even deny it. Christopher was quoted saying, “Let me tell you, I’ve been working with Tom Cruise for 15 years and I cannot tell you the number of times I’ve been standing next to the man, witnessed an event and then read about it in the trades the next day and none of what they describe is actually true.”