Sushmita Sen and Lalit Modi have been the talk of the town for the past couple of days for their relationship. Both Sushmita and Lalit have been getting a lot of flak, basically, the trolls have been trolling them for the same. Sushmita Sen is currently on a vacation in Sardinia amidst all the hullabaloo around her personal life. She’s also giving them back in her own savage, boss lady way with her social media posts. And now, Sush and Lalit are engaging in social media PDA, it seems. Lalit Modi has dropped a flirty comment on the Aarya actress’ latest video post. Also Read – Trending Entertainment News Today: Akshay Kumar opens up about his lack of commitment; Deepika Padukone on having suicidal thoughts and more

Sushmita Sen has been dropping the hotness bomb on social media a lot these days. While she made it to the entertainment news recently for her relationship with IPL found Lalit Modi, these days, she has been grabbing the limelight for her social media posts. And just a couple of hours ago, Sushmita Sen dropped a video in which she was seen snorkelling. Sushmita is seen all alone in the video. The gorgeous beauty wore a white skirt on top of a black monokini, it seems. The video features the former Miss Universe jumping into the blue water. “Align, pause, breathe…let go!!! A lesson in surrender, as I experience the cushioned embrace of the Mediterranean Sea!! Where life has depth…I am all in!! I love you guys!!!” Sush captioned the post. Check it out here: Also Read – Did Sushmita Sen hit back at trolls mocking her relationship with Lalit Modi? Check out the super hot, savage post

Lali Modi dropped a flirtatious comment on his ladylove, Sushmita Sen’s post. He wrote, “looking hot in Sardinia,” and also posted a couple of emoticons. While some agreed with Lalit’s comment, there was a lot of trolling happening in response to his comment on Sushmita’s post. It was Lalit Modi who has been getting trolled. In fact, both Lalit and Sushmita Sen have been getting brutally trolled ever since he made his relationship official with Sushmita Sen. Check out Lalit’s comment here: Also Read – Charu Asopa-Rajeev Sen marital crisis: Netizens troll the actress for flaunting desi look with sindoor on Ziana’s 9-month birthday; say, ‘Waise rishta toot chuka hai’ 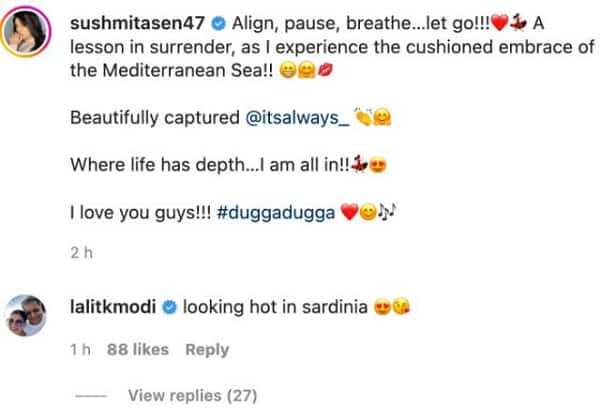 Sushmita Sen is a boss lady and she doesn’t usually give two hoots about the trolls. However, she knows how to set boundaries and also give them back in a savage manner. Sushmita revealed that she is in a happy place in her life right now.