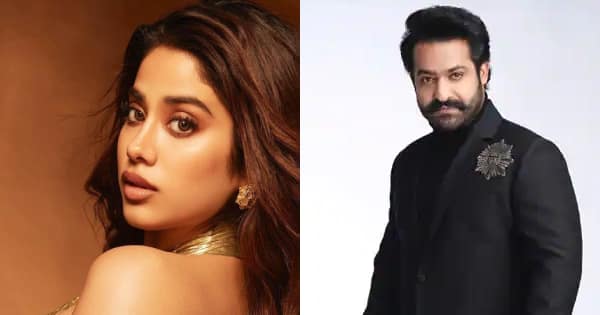 After the stupendous success of RRR, Jr NTR is now said to be gearing up for his next. It is NTR 30 along with director Koratala Siva. Jr NTR’s film is yet to receive its title and fans are very excited to know who is going to be the female lead in this one. Rumours had it that Bollywood diva Janhvi Kapoor is being considered to be the female lead. Given that a lot of Bollywood stars are making their way to the South, it was being whispered that Janhvi too is going to make her South debut with NTR 30. But now the actress has set the record straight. Also Read – Khatron Ke Khiladi 12 star Shivangi Joshi’s lavish Mumbai home is all about elegance and minimalism [View Pics]

Janhvi Kapoor to be in NTR 30?
In an interview with Pinkvilla, Janhvi Kapoor clarified that she has not signed Jr NTR’s film. She mentioned that she would love to do a South Indian film but this one is not hers. The Dhadak actress was quoted saying, “He is such a legend, but unfortunately, the offer hasn’t come my way yet. I am waiting and I am hoping for the best.” It was in May that Jr NTR had announced this film with a video teaser. Jr NTR has also announced NTR 31. Also Read – Happy Birthday Genelia D’souza: Sye to Boys, here are some of her best South movies

Alia Bhatt in NTR 30?
Earlier, it was being reported that Alia Bhatt has been signed in for NTR 30. It was right after the release and success of RRR that the speculations were being made. She had even confirmed that she is in talks with the makers. To Cinema Express, she said, “I wouldn’t want to comment on it now, but I am really excited to do more films in Telugu. I had a lovely time working with Tarak (Jr NTR in RRR). Even the director that I’m currently talking to (Koratala Siva) is someone who has done some great work till now.” However, it appears that Alia Bhatt is not a part of it. Also Read – Friendship Day 2022: Mouni Roy-Arjun Bijlani, Ankita Lokhande-Rashami Desai and other BFF jodis from TV world with a long standing friendship