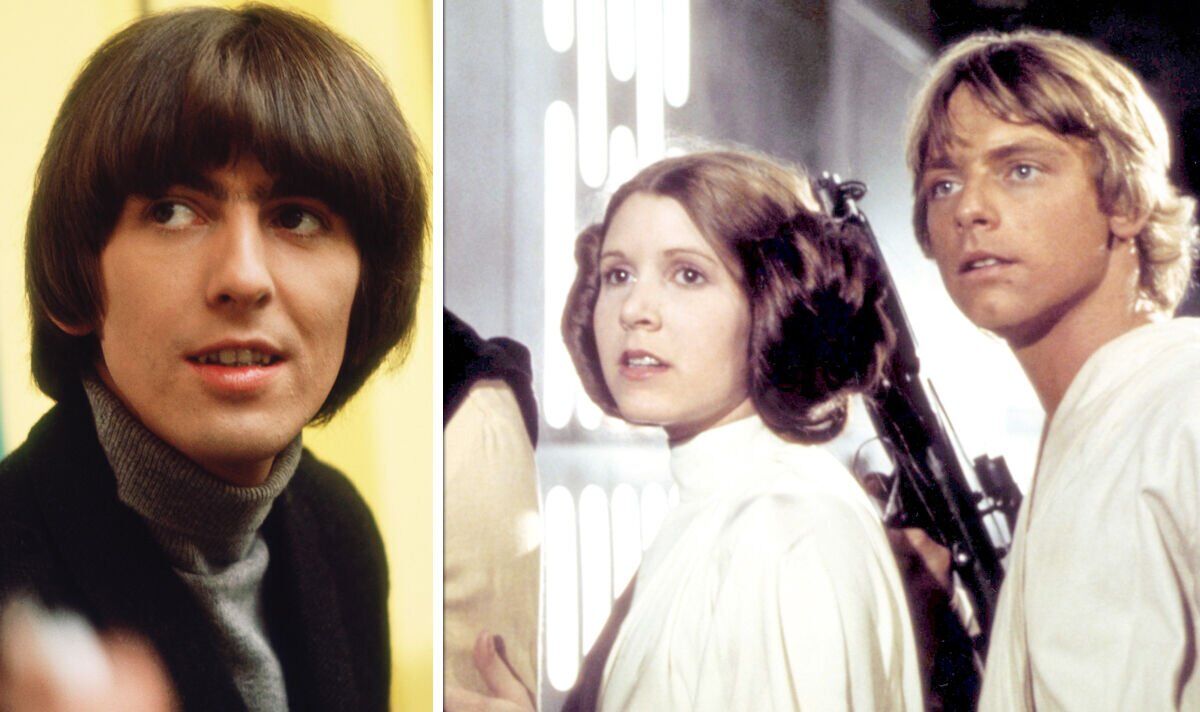 The Beatles stars were all massive pop culture fans, but in particular, George Harrison loved Star Wars. The Fab Four star was extremely religious and practised the Hare Krishna spiritual movement after visiting India for the first time with the band in 1968. And the Quiet Beatle saw reflections of his beliefs in the narrative of Star Wars.

Harrison believed that the cosmic superpower known as the Force was a metaphor for spirituality and God.

On top of his beliefs, Star Wars was (and still is) a cultural phenomenon, especially during its film releases through the 1980s.

The actors in Star Wars were equally obsessed with The Beatles, however. In particular, Mark Hamill – the star behind Luke Skywalker – was an enormous fan of the British rock band.

Hamill recently confirmed that one chance encounter with Harrison almost left him in tears after meeting one of his heroes.

He said: “I was sitting in the airplane and George Harrison was across the way from me, so I sent a little note over.” (sic)

Hamill noted that he wasn’t in the habit of asking famous people for autographs. Instead, he asked them questions, such as: “How did you do this?”

“So I sent the note over,” he recalled. “It just said: ‘Dear Mr Harrison, thank you so much for supplying the soundtrack of a lifetime,’ and so forth.”

Before long, a stewardess came over to Hamill and told him: “George Harrison would like to meet you.”

Hamill instantly became nervous about meeting one of The Beatles and was almost moved to tears by the idea of meeting one of the biggest musical icons of history.

Harrison’s son, Dhani Harrison, compared the musical icon – who died in 2001 – to the wise and knowledgeable figure Obi-Wan Kenobi.

The singer also once said one of his singles was “a lot like Star Wars”.

He was speaking about That Which I Have Lost, which was based on a passage from the 700-verse Hindu scripture Bhagavad Gita.

He said: “The Gita is all about the struggle against the forces of darkness – limitation, falsehood and morality. It sounds a bit like Star Wars, but life is a battlefield.”

Harrison died on November 29, 2001, after suffering from lung cancer. He was surrounded by his wife, Olivia, Dhani, and some friends.

His final message was spiritual in nature. He said: “Everything else can wait, but the search for God cannot wait, and love one another.”

His ashes were scattered according to the Hindu tradition in the Ganges.