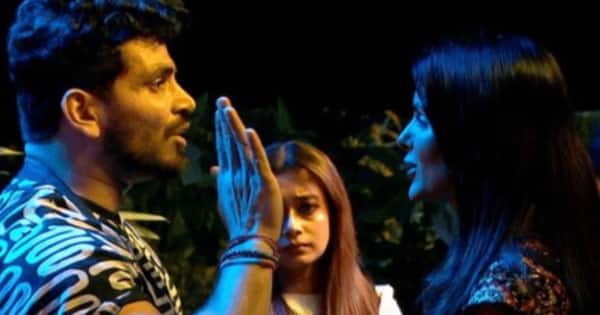 The fights in Bigg Boss 16 house are getting crazier by the day. Only eight contestants are left in the house and all are trying their best to make it to the top five. It has been more than 100 days and contestants now seem to get desperate to reach the finale. Today, the nominations task took place and it was as dramatic as expected. Shiv Thakare and Priyanka Chahar Choudhary had a massive fight during the task and Sidharth Shukla’s name also came into it. Also Read – Trending Entertainment News Today: Pathaan full movie leaked online, Bigg Boss 16 contestants safe from elimination and more

During the fight, Priyanka Chahar Choudhary said that the mandli targets her and she plays solo. To this, Shiv Thakare said that she is copying Sidharth Shukla and she should not do so. Netizens are divided on it. Many are stating that Shiv should have not dragged in Sidharth Shukla’s name as nobody can be as good as him. Some are siding with Shiv saying that he exposed Priyanka Chahar Choudhary’s game by making that statement. Also Read – Bigg Boss 16: Nimrit Kaur Ahluwalia’s co-star Rutuja Sawant says she has given ‘zero contribution’ to the show; questions, ‘what potential she has?’

Check out how netizens reacted to this:

This is worst comeback in the history of comebacks and the most disrespectful one too. Shiv dragging a deceased for his flop era?#PriyankaChaharChoudhary #SidharthShukIa #PriyAnkit #BB16 #BiggBoss16 pic.twitter.com/eKvmEGtfY9

Yes Shiv mentioned in the interview before Bigg Boss, His all the favorite contestant in BB was Sidharth Shukla !!!

What are your thoughts on this? Tweet to us and let us know. Also Read – Bigg Boss 16: Tina Datta, Shiv Thakare and others are safe this week due to no elimination? Here’s what we know