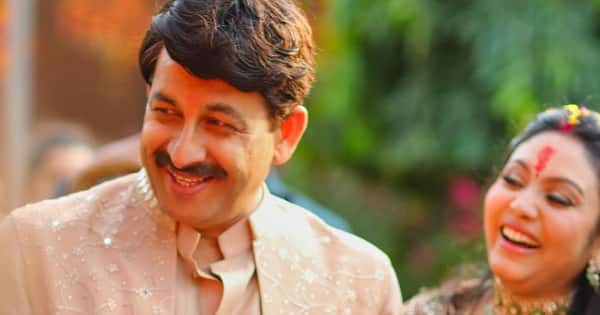 Popular Bhojpuri actor turned politician Manoj Kumar Tiwari is going to be a father again. Manoj Tiwari is 51 and his wife, Surabhi Tiwari is expecting their second child. The noted singer who was also a part of Bigg Boss 4 took to his social media handle to make an announcement of the same. Manoj Tiwari shared a video of Surabhi’s baby shower and shared a small yet a heartfelt note in the caption. Check out the video of Manoj Tiwari and his wife’s Godh Bharai below… Also Read – Holi 2022 Top Bhojpuri Songs: Nirahua, Pawann Singh, Khesari Lal Yadav, Pawan Singh’s songs to groove to this festival of colours

Manoj Tiwari to embrace fatherhood at 51

The news of Manoj Tiwari is going viral everywhere right now. It is also going viral in the Entertainment News. The actor who ventured into politics shared a very heartwarming Godh Bharai video of his wife. He and his family had a small yet grand Godh Bharai in their home town. Also Read – ‘Kangana Ranaut should be RESPECTFUL’; actor turned MP Manoj Tiwari shares advice for the Dhaakad star

Manoj Tiwari complimented his wife, Surabhi Tiwari in beige. Surbhi was seen twinning in a red outfit with their toddler daughter. Manoj and Surabhi were seen gushing over their little one while everyone showers flowers and blessed Surabhi. Also Read – Manoj Tiwari’s ex-wife dating THIS Punjabi singer? Couple makes relationship official on social media

Surabhi is Manoj Tiwari’s second wife. The actor was previously married to Rani Tiwari. They have a daughter named Rhiti. Manoj and Rani parted ways in 2012. He later married Surabhi and had another daughter. In an interview last year, Manoj Tiwari revealed that it was his first daughter Rhiti who suggested him, that he and Surabhi should tie the knot.

Congratulations to the parents-to-be and the family.