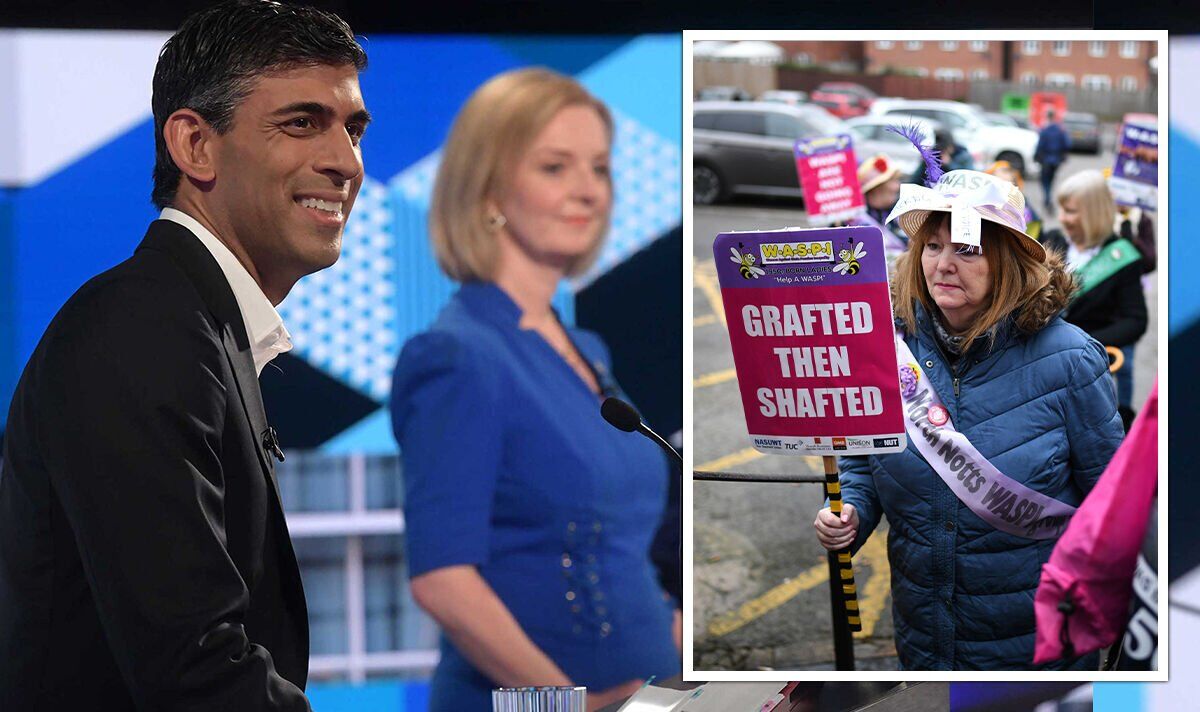 The state pension age change impacted millions of women who saw their state pension age shift from 60 to 65. Campaigners argue they were not provided with ample notice to make preparations – and have suffered financially and emotionally as a result.

The matter has been a significant topic for years, with campaign groups such as Women Against State Pension Inequality (WASPI) calling for “fair, transitional arrangements”.

Now it has become a hot button for the Tory leadership candidates, who have addressed the issue on numerous occasions.

“What I can tell you is that I absolutely believe pensioners should have dignity in retirement and that we should support them.”

Mr Sunak then cited a range of cost of living measures and the return of the triple lock as evidence he had sought to do more for older people.

But 1950s-born women appear to remain frustrated over the ongoing matter, calling for more to be done.

Angela Madden, Chair of the WASPI campaign, told Express.co.uk: “We are sick and tired of the implication from Rishi Sunak and his colleagues that this issue has somehow already been resolved through the courts.

“They persistently misrepresent our position in suggesting we are challenging the legality of changes to the state pension age, or seeking to turn the clock back so that pensions are again received at 60.”

Ms Truss appeared yesterday on GB News, where she received a question from Patricia Morgan, asking whether she would take action on 1950s pensions if she were to become Prime Minister.

However, the frontrunner delivered a hammer blow response similar to that of Mr Sunak, when she stated it is unlikely the matter would be resolved under her Government.

Ms Truss said: “I have huge sympathy for WASPI women. In the pension and tax system, we haven’t looked after women fairly – and women have suffered.

“But to be honest with you, and I have to be honest, on this case of the WASPI women, I don’t think it was handled very well at the time.

“I completely admit that and there wasn’t enough respect shown. But I think where we are at now, it would be very difficult to go back.”

However, this was a response which did not prove good enough for the campaign group, who have rallied back.

Ms Madden continued: “Ministers – most recently Liz Truss – suggest we are seeking to ‘go back’ to the previous state pension age.

“She says we want to ‘reopen’ the issue, as though the matter had ever been closed. It hasn’t been dealt with at all.

“If Liz Truss really sympathises with the position WASPI women are in, as she claims, then the least she can do is agree to meet us and listen to what we have to say.

“If she did so, she would find we are campaigning only for a limited, one-off compensation payment in recognition of the proven maladministration by the DWP.

“It is Government’s failure to communicate with us properly that caused immense distress and hardship to 1950s born women in the first place.

“Now it is their failure to discuss it with us that is getting in the way of coming to a fair and fast resolution. It is just an insult.”

Do you think more needs to be done for WASPI women? Join the conversation in the comments section.

WASPI says they are campaigning for ministers to open up a dialogue with the campaign group.

Within this, the group state they would discuss a one-off compensation payment, to “make up for the financial loss and emotional trauma” experienced by women born in the 1950s.

WASPI asserts these experiences are as a result of the maladministration of the DWP – found in an investigation by the Parliamentary and Health Service Ombudsman.

Ms Madden added: “It is simply insulting that Government keeps on ducking that conversation.”

Speaking about state pension age changes, a DWP spokesperson previously told Express.co.uk about the Government’s decision 25 years ago that it was going to make the state pension age the same for men and women.

The spokesperson added: “The Government decided this was a long-overdue move towards gender equality.

“Both the High Court and Court of Appeal have supported the actions of the DWP, under successive governments dating back to 1995, and the Supreme Court refused the claimants permission to appeal.”